Hello friends it’s Tim here again from Super Mayhem, awooo, and boy howdy do we have some fun game hacking action for you today!

Once again we are going to add to our Game Genie Hijinx series with the massively popular and often requested 1990 platforming giant that is Super Mario World on the Super Nintendo!

And lucky for us once again there are tons of cheat codes for this game! So if you are a fan of Super Mario be sure to smash like on this bad boy, share it with your friends, make a comment about something and of course subscribe with notifications on. And with all that said, on with the show!

Starting off easy into this list, one of my favourite kinds of codes are the ones that mess with gravity, like the code DD2C-AF6F which is pretty crazy! For a start, you actually die on the intro screen, get a game over and then you can play the start screen! Which is actually really cool! But what this code actually does is cause you to jump as high as you want whilst holding down the B button. This essentially allows you to fly across the entire level no problems, just watch where you land. These are great kinds of cheats so we are off to a flying start, pun intended.

The contrasting game genie code DE2C-AF6F isn’t as fun, as, well, you can’t really jump very high at all. C ya later Yoshi!

The massive 4 line code CBB7-6D67 + DBB7-6DA7 + 3CB7-6FD7 + 69B7-6F07 is pretty weird! When you start the game the Mario at the top is black and seems to be wearing some kind of mask! When you jump into a level you are still a black and white Mario but this time whenever you pick up a Mushroom you become invincible! Pretty whacky! I also noticed that when you got a 1 up a feather would appear in your item box which is pretty handy! However if you use or get a feather your black and white stature disappears. 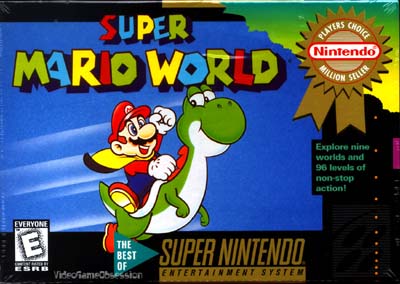 A similar 4 line code that is CBB7-6D67 + 5BB7-6DA7 + 3CB7-6FD7 + 69B7-6F07 is super strange! This time Mario’s colour palette is a weird almost neon colour and you seem to just scoot along the ground when you run, no legs flying here. This time when you get a Mushroom for some reason a piranha plant head appears on the ground and you get some kind of weird grey item in your item box. When you try to use this mysterious item, it starts floating through the sky almost like an enemy in a bubble. This sprite is bizarre, it looks like a mock up of green Monty moles or something. Oh, and if you try to collect this item it actually hurts you and can kill you. Weird.

Another classic Game Genie cheat code is CBEA-6DAD which allows you to swim in any level you want! This even effects the intro screen which is pretty hilarious, look at Mario swim aimlessly before you even start the game! Naturally this code makes passing actual levels a whole lot easier, plus you have the entertainment of the swimming animation! It’s a win-win situation!

The 3 line code C9B7-6DA7 + 3CB7-6FD7 + 69B7-6F07 is another strange one. With this code in play, on the map screen Mario at the top left becomes red and sort of walks and looks around, it’s kind of strange! When you enter a level you remain this weird red Mario and you start acting in a bit of a bizarre demeanour! This is amplified when Mario picks up a shell, suddenly he keeps falling down backwards whenever you start walking! Plus, when you get a mushroom you become Fire Mario, pretty handy! I think we will call this one “Drunken red fiery Mario”, or maybe you can come up with a better name in the comments!

The cheat code 0BCD-AF6F is actually super epic! Whenever you enter a level you just go flying upwards and enter one of Yoshi’s bonus stages, you know the ones where you fly and collect coins! Not only is this awesome on it’s own but when you complete the bonus or just fall down the level becomes beaten and you score yourself a purple Yoshi! Awesome!

Are you sick of those Koopa Troopa’s killing you in the first level? Try the game Genie code 3E32-6DAD and you will remove all enemies from all levels! For some reason Mario looks like he is invincible, which is cool, I like it, but that doesn’t matter because there are no enemies to run into! Unfortunately in my test it also removed items like the P block, and it also removed the ribbon from the end poles, so well, you can’t really pass the level. Still, it’s a neat code!

Moving on, we have a quick video question today, sent in by our own correspondent Schmurr Mcgurr.

Schmurr: Hello my darling Mayhem boy, no matter what I feed my Yoshi, whether it be apfel strudel, Koopa Troopa’s or even the best finest Russian caviar, he still won’t fly! He is even a purple Yoshi! What can I do?

Well Mr Mcgurr, the two line Game Genie code B9E5-A4AD + F8E5-A7DD is pretty cool as well! Basically, whenever you collect a Yoshi coin, your Yoshi will get wings! You don’t even need to be riding a Yoshi first for it to happen, you can collect a Yoshi coin and then your Yoshi will spawn with wings! Or if you are already riding a Yoshi he will then gain wings! If this wasn’t awesome enough on it’s own, if you die whilst using the winged Yoshi, you will automatically pass that level and unlock the next! Now this is a handy Game Genie code!

EDA5-0F6F is another super handy cheat code. With this enabled all you have to do is push up on your control pad and then press Select in order to change Mario into various power ups! Unfortunately invincibility isn’t included but it is definitely handy if you need to change from small to cape Mario for example. This is another good one to have handy whilst playing Super Mario World!

Since I just complained about not being invincible we should probably take a look at the code DDA6-DF07 this cheat actually enables what is known as the second Nintendo debug for the game. By holding L and pressing A twice, you become invincible, not in the star sense, but rather in the sense you can move Mario anywhere you want on the screen and bypass enemies no problems! Presumably this was used to test certain parts of levels to make sure no bugs were missed so you could just place Mario anywhere you want. I noticed when I was fighting Iggy that it was like I was running full on, I still had a cape from a previous cheat and could fly easily as if I had been running! Oh, and to get out of the moving around Mario mode, just hold L and then press A again to return to normal game play, otherwise you will get stuck as you can’t go through doors and such.

I have to add in the quick game genie cheat code 14B4-6F07 this one lets you start the game with a very handy 99 lives, pretty useful if you are testing out cheats and keep dying like me.

If you want even more lives than try the two line code DD64-A7D7 + DD67-AFA7 with this in play every coin you collect, even Yoshi coins, will give you an extra life! It also seems to muck up the coin counter in the top right corner, but oh well, free lives, baby!

The two line code B837-6D61 + BA37-6F61 promised me that Lakitu would throw out an amazing flying Hammer Bro, however this didn’t quite work, but that doesn’t mean it isn’t a handy code! Well, when I first killed Lakitu a Hammer bro did come flying out of him, but Lakitu himself whether in cloud or pipe form, doesn’t throw any enemies at all! This makes levels featuring that menace a whole lot easier!

BF37-6D61 does effect Lakitu quite drastically though! This time, instead of throwing no enemies, Lakitu dispenses Chargin’ Chucks like there is no tomorrow! Both in cloud and pipe form! This nearly makes the game impossible as before you know it you will be surrounded by Chucks all wanting a piece of that sweet Mario pie. This code can actually be modified by changing the first two letters or numbers of the code to deliver different effects. Here is a list of the modifiers for you to test out, you can go from bob-ombs all the way to fish and back, if you want to make Lakitu more deadly that is!

An interesting Yoshi code is 82E9-64A0 + 82E2-04D0 with this one enabled Yoshi will be able to keep generating the item or enemy he ingested! So in this example I picked up a red Koopa Troopa, I then spat our fire as expected but then my next tongue adventure was normal but then the second press of Y I once again shot fire, without eating another Koopa Troopa! This is pretty cool and has some weird effects! I was able to continually spit out green shells and for some reason at one point I even spat out an information box! This is an interesting cheat for sure!

And the last Game Genie Code we will leave you with is 5332-6DAD is actually pretty awesome, weird, but awesome. So what the code promises is Invisibility, which is pretty true! The intro screen already shows a ghost Mario playing the game which is pretty amazing on its own. However when you play yourself it gets weirder! For a start you are missing from the top left of the map screen, then when you enter a level there is a kind of Shadow Mario on the left hand side of the screen that kind of emulates the state of Mario, ducking, running, etc. However your actual position on the screen is a bit of a mystery! Unless of course you are holding a turtle shell or if you are super observant to the little bits of dust that appear when you stop suddenly or change direction. I also tried this code whilst riding a Yoshi and it looked like Yoshi was the main player! This bugged pretty badly though and I ended up being able to just move through anything all the way to the end of the level, but I wasn’t able to pass it for some reason. This is a super whacky cheat code and definitely one you should try if you have the chance, it would make a great challenge cheat or something!

Anyway that’s it for today my friends! I really hope you enjoyed hacking Super Mario World on the Super Nintendo with me! If you did then be sure to smash a big fat like on this bad boy, share it with your friends, make a comment about your favourite cheat code or something and of course subscribe with notifications on! If you really like the Mayhem and what I do then you can also check out our join button or Patreon page below to help support future videos! And with that said, I’ll catch you soon!

Top 5 best video games with the soundtrack on vinyl record